Who are you and what do you do?
I’m Lizzie, I paint watercolour pop culture portraits, bold mixed media posters and I hand sew dolls and figures, usually in felt. Also pretty good at existential crisis.

When did you begin making your incredible art?
I’ve always been a creator, I was actually more prolific as a child (although I can’t speak to the quality of that work) and my family really encouraged my creative streak so I was lucky enough to try lots of difference mediums early on. I settled into watercolours during college, I really enjoy the flexibility of their use for different colour payoff and effect, and the easy way they glide into paper. I’ve also been sewing since I was a teenager, I used to put pockets in all my dresses and became quite proficient at taking clothes in due to a long fascination of vintage aged antique clothes. I started making small felt mice in Victorian dresses a few years ago, and then making the dolls and creatures just sort of followed from there…

What inspired you to create your form of art?
I like things that are tactile but also give quick results- I’ve got a really busy mind and get bored or distracted easily so I’ve learnt through the years that I’m more likely to finish things if I can see progress on it. That’s what I love about the little figures and the embroidered dolls, and I suppose it’s what I fell in love with about watercolours and ink. I take inspiration for the subjects from all over the place, at the moment I’m enjoying doing tiny pop culture portraits inspired by religious iconography, but it really depends on what I’m doing and what I’m into at the time! I do better when I’ve got a commission from someone as it gives me a focus so I’m more likely to run with it to try and make something that’s going to be loved. I don’t think I’ve settled into an art form or a style that’s fully ‘me’ yet, but I’ve always been an experimenter so maybe I never will!

What is your one essential tool that you cannot live without (for your art)?
Probably the internet! It’s so so vital for references, especially taking on the icon dolls I make. I’m making a Syd Barrett doll at the moment for someone who adores him so being able to find lots of pictures and information is critical to my process.

Where can I find you on the web?
I’m on instagram @fannyspangles
My Etsy shop is FURYmoonriver

What do you like to do when you are not creating?
I’m a great lover of film so I love to get stuck into a picture or a series, I also love video games and reading and get very drawn in (read: obsessed) luckily my SO is the same and our dog is patient and independent so neither of them mind!

Have you got any pets?
Currently one gorgeous dog Maya, I’ve only had her a month but I can’t imagine her not being here! She’s a rescue and she has some anxiety (like me) and trust issues from previous trauma that we’re working on together, she’s also going through her moody teenage phase so she can be a right little madam (also like me) but she’s so sweet and hilarious and genuinely brings me so much joy, I’m hoping that as we build our relationship we’ll both be much happier, more confident individuals.

What is your favourite art book? (or, what are you reading at the moment, your choice)
I subscribe to this incredible film magazine called Little White Lies, and every issue is beautifully illustrated so they’re very inspiring and just generally pleasing. I love reading but I’ve either got 3 books on the go or I’ve got a stack of 10 that I mean to read but don’t get around to, there’s no in between. 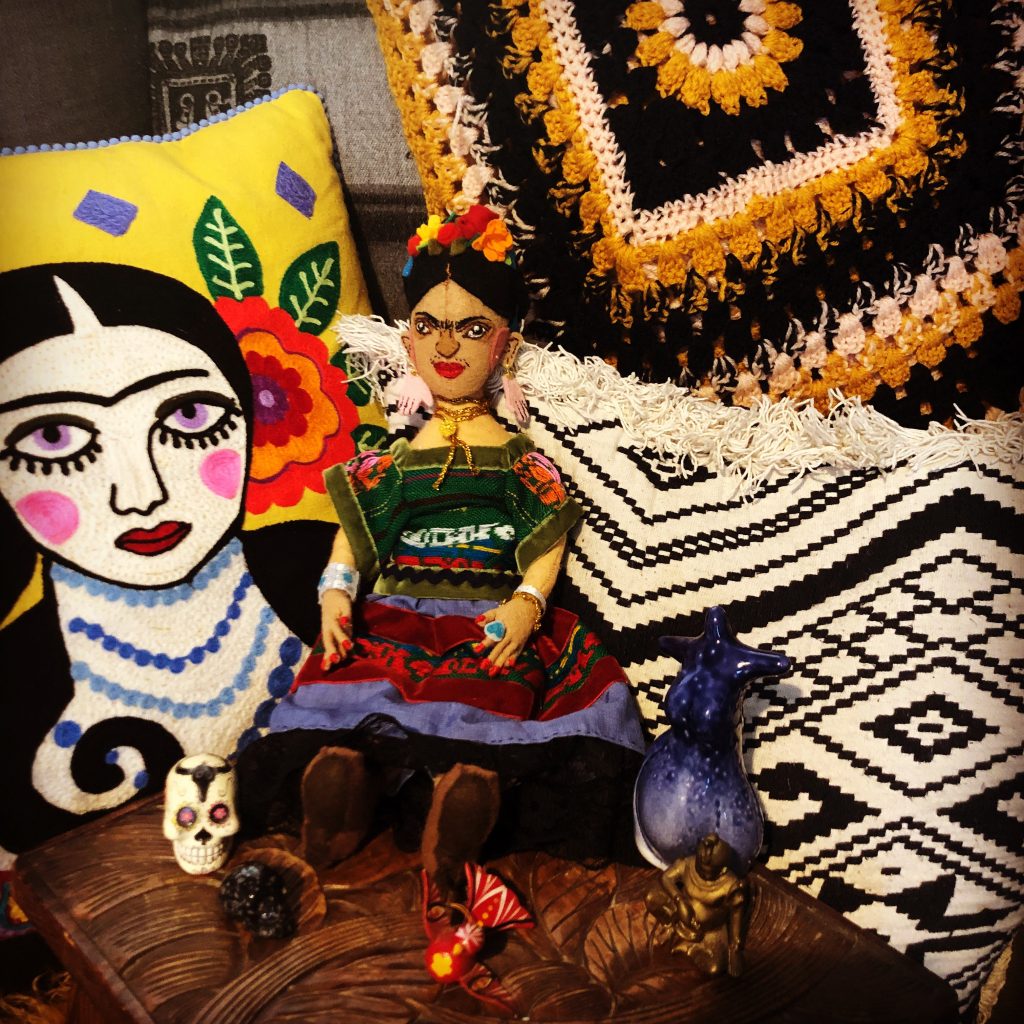 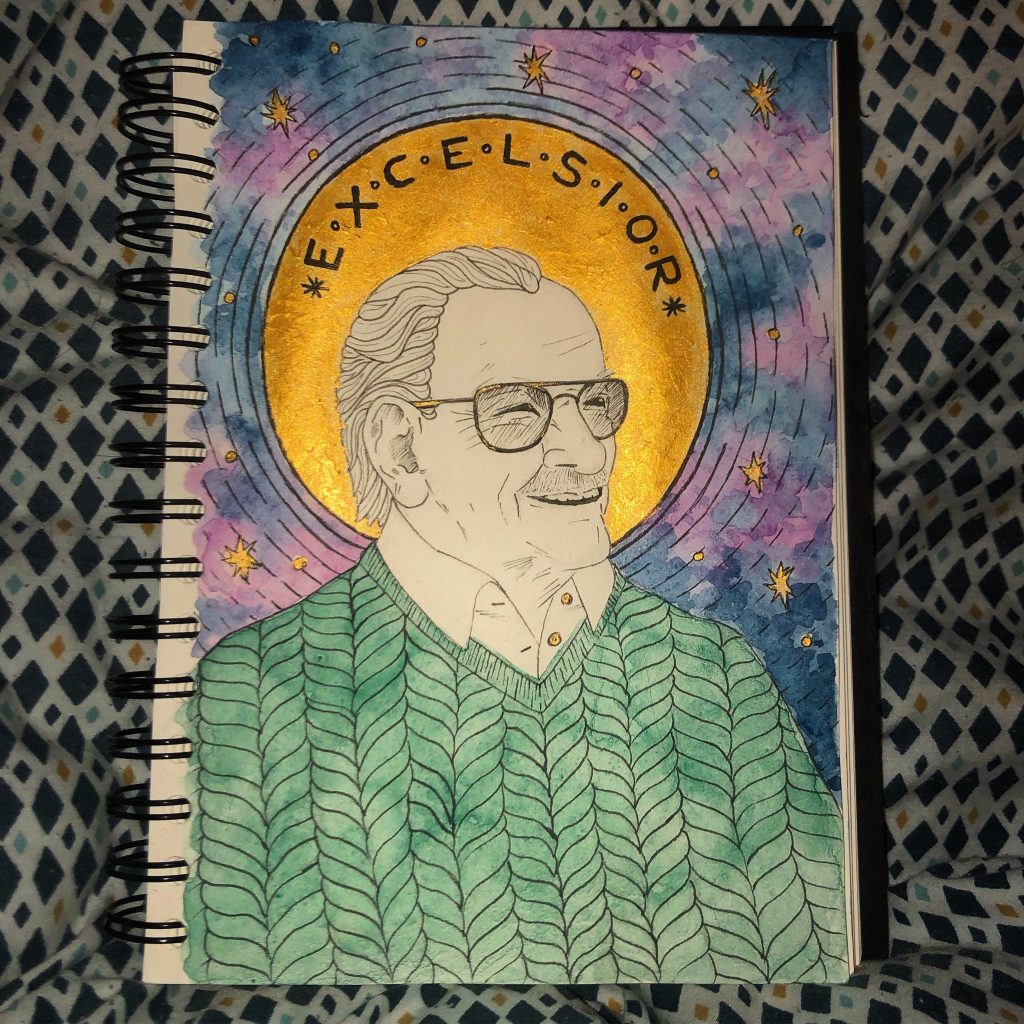 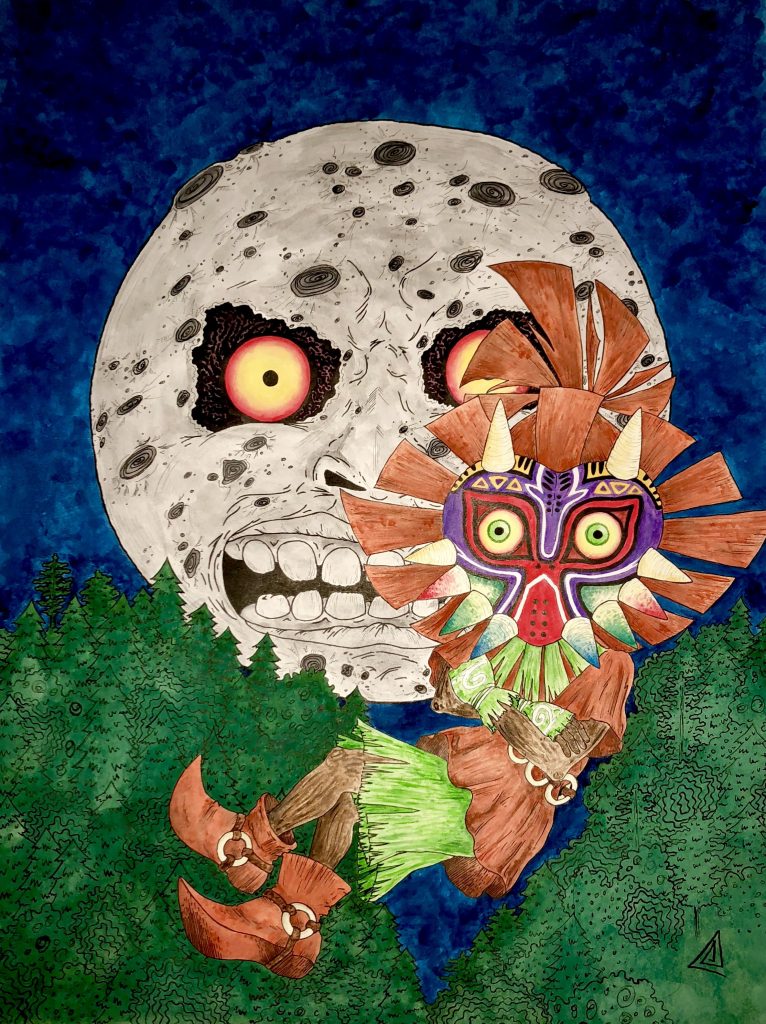 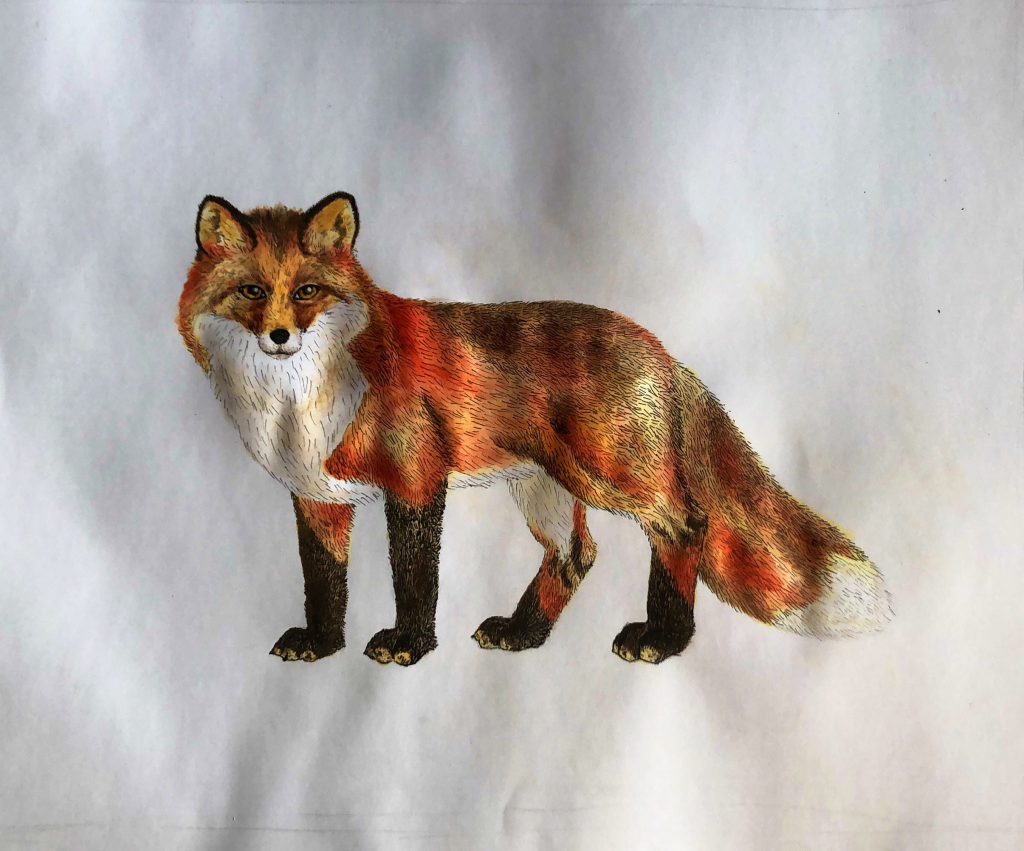 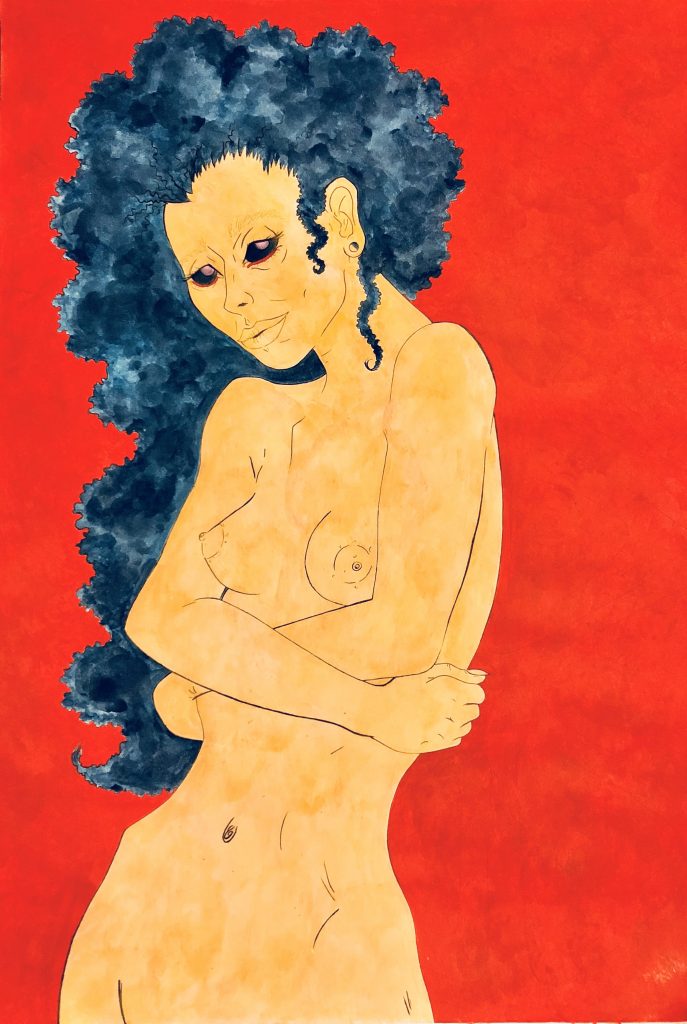 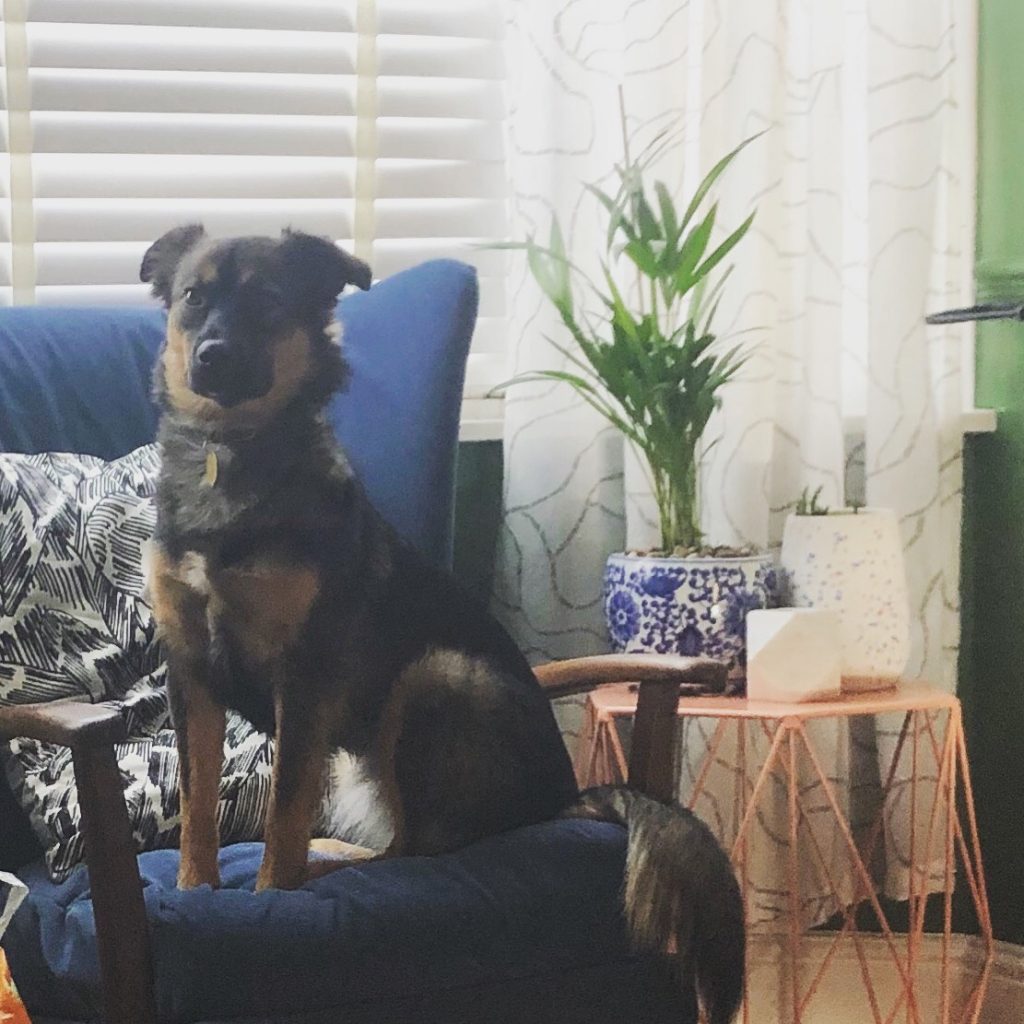 And so the saga continues.  In The Yin and Yang of Life I mused how incredibly bad and painful situations can also bring out amazing light and kindness.  That people who I know and people who I don’t – people who are not even family and have no ties to me – can show such incredible kindness and love has brought me to tears many times.  One minute I can be sobbing in despair on the kitchen floor, the next my eyes are streaming and my heart is full of hope.  That anyone could even care that much about little old flawed me is kind of mind blowing.

A couple of days ago I watched I, Daniel Blake.  You must have heard of the film, it has been much talked about and highly acclaimed.  It’s ironic that the people that the film is about are unable to afford to go to the cinema to watch it (like me).  It’s probably better that way, because it broke my heart right from the first few scenes with it’s very true to life situations and characters.   I should advise – if you haven’t already seen it – that if you have ever been unemployed or sick or have ever been through the welfare system in any way you might choose not to watch it unless you are totally healed and buoyantly happy.

That set my mental health back a few days. I might add that Katie, when she was hungry and went to the food bank and then chose to follow her alternative career path was already at least sixty quid a week better off than me since my tax credits were completely cut.   She would still have been in receipt of her child tax credits – the payments meant to keep your children fed and clothed.

Working and child tax credits are two payments – the working element is paid if you work for 16 or more hours a week and the child ones are received by (as far as I know) by anyone with a child and below a minimum income.  In my case, the working tax credits were cut (apparently I have not earned enough – go figure) and my child tax credits were cut to pay back the alleged “overpayment”.  Katie would have had circa £100 a week still coming in (still not enough for a secure healthy life for three people).  I have less.

Daniel’s situation was one I am trying to avoid. The CAB suggested that I apply for jobseekers allowance or ESA.  I work too much for jobseekers and even before I watched the film I was aware of the hoops that poorly people are expected to jump through for ESA.  My health condition would mean I was eligible but I am not strong enough to fight unqualified assessors and I don’t have enough money for endless phone calls and trips to assessment centres.

I had a letter through on the Thursday, telling me I was allowed hardship payments. There was no mention of how much, or for how long, or with what frequency, or whether or not they are a payment or a loan.  So I checked my bank account and found £65.  I also found out that my broadband and phone direct debit had gone out and it was £10 dearer than expected, so I didn’t dare make another phone call to find out more.

So I’ve been allowed £65 for the past three weeks.  My phone calls to HMRC to find out what was going on cost £10.   I topped up my mobile £5 to make calls when my credit ran out.  I’ve sent two letters to HMRC (the first one didn’t go to the correct office), and three to my local council to beg council tax assistance.  I’ve sent another the the NHS to apply for help with my prescriptions because I realised that if my tax credits had stopped, so would my free prescriptions, opticians and dentist. Six recorded delivery letters at £1.72 makes £10.32.

So out of that £65, I had £39.68 left after the essential spends associated with this termination of my income.  This is without counting my loss of business that I have incurred with the effects that it has had on my mental and physical well-being, which is ongoing.  I also learned from the film that there is no time limit on a “mandatory consideration”, the appeal process that I have started.

You might be wondering why I am airing my dirty laundry in public.  It is embarassing to be this poor. It is heartbreaking to explain to your child that you can no longer afford things they would like to do.   If I can tell my story and help one person, it will be worth it.  What cauuses me great outrage is that HMRC can  get away with making families hungry and cold and yet companies like Vodafone and Goldman Sachs have tax debt written off.  People need to know what is happening!

Thousands of normal working families like me have sent HMRC tax credits timely and accurate information and have found that they suddenly and inexplicably owe thousands of pounds of debt.  We are shown no calculations or reasons for this, we just get a letter one day telling us “tough luck mate, we worked it out wrong and we are taking it back”.

Tax avoiders cos this country billions of pounds and working families have no choice but to be devastated by the miscalculations of the far away civil servants.

I am trying to be positive and am going to do my best to start creating again tomorrow, though I am actually scared of the post at the moment.  I’m hoping postie doesn’t call and I can start the week with a clear head.  I’ve got so much to do, and so much to finish and make and I’m still in limbo.  My cupboards are at least full enough thanks to some amazing local food banks (the three families waiting together just in my group were ALL working families) .  I can only wait now.

UPDATE: I have had a letter now that tells me I am to receive £65 a week until April, after which time we will receive £57 a week.  For two people.  Apparently it is because (I deduced, from reading many websites on the appeals process, because they haven’t told me directly) in the year when I was being stalked and had to change my business and set up a new one, I over estimated my income and as a result of that, they are taking back over £3,000 from me.   How can this even make sense?  It’s like a “small print” clause they do not publicise.  I was careful to share all my information with them in a timely and honest manner and have been punished for it.